The Secrets of Anger

Posted by Kim Graae Munch in Esoterics, Rosicrucianism, The Dark Night of the Soul - Metanoia, Thinking on July 29, 2019

This text by Rudolf Steiner is the best I have seen on the many sides of anger. I have added a few keywords in blue to make it easier to read, and corrected ego to “I” in the text to follow the original text:

We shall see how in the Intellectual Soul [awake consciousness] there is something which enables the “I“ to take its own education in hand.

We will single out this one element in the Sentient Soul [subconsciousness] and consider its two-sided mission for educating the “I“, This element is one to which the strongest objection may perhaps be taken — the emotion we call anger.

Anger arises in the Sentient Soul [subconsciousness] when the “I“ is still dormant there. Or can it be said that we stand in a self-conscious relation to anyone if their behaviour causes us to flare up in anger?

Let us picture the difference between two persons: two teachers, let us say. One of them has achieved the clarity which makes for enlightened inner judgments.

He sees what his pupil is doing wrong but is not perturbed by it, because his Intellectual Soul [awake consciousness] is mature. With his Consciousness Soul [superconsciousness], also, he is calmly aware of the child’s error, and if necessary he can prescribe an appropriate penalty, not impelled by any emotional reaction but in accordance with ethical and pedagogical judgment.

It will be otherwise with a teacher whose “I“ has not reached the stage that would enable him to remain calm and discerning. Not knowing what to do, he flares up in anger at the child’s misdemeanour.

Is such anger always inappropriate to the event that calls it forth? No, not always. And this is something we must keep in mind.

Before we are capable of judging an event in the light of the Intellectual Soul [awake consciousness] or the Consciousness Soul [superconsciousness], the wisdom of evolution has provided for us to be overcome by emotion because of that event.

Of all things that the Sentient Soul [subconsciousness] experiences, let us therefore consider anger.

It points to what will come about in the future. To begin with, anger expresses a judgment of some event in the outer world; then, having learnt unconsciously through anger to react to something wrong, we advance gradually to enlightened judgments in our higher souls.

So in certain respects anger is an educator. It arises in us as an inner experience before we are mature enough to form an enlightened judgment of right and wrong.

This is how we should look on the anger which can flare up in a young man, before he is capable of a considered judgment, at the sight of injustice or folly which violates his ideals; and then we can properly speak of a righteous anger.

No-one does better at acquiring an inner capacity for sound judgment than a man who has started from a state of soul in which he could be moved to righteous anger by anything ignoble, immoral or crazy. That is how anger has the mission of raising the “I“ to higher levels.

On the other hand, since man is to become a free being, everything human can degenerate. Anger can degenerate into rage and serve to gratify the worst kind of egoism. This must be so, if man is to advance towards freedom.

But we must not fail to realise that the very thing which can lapse into evil may, when it manifests in its true significance, have the mission of furthering the progress of man. It is because man can change good into evil, that good qualities, when they are developed in the right way, can become a possession of the “I“. So is anger to be understood as the harbinger of that which can raise man to calm self-possession.

But although anger is on the one hand an educator of the “I“, it also serves strangely enough, to engender selflessness.

What is the “I“‘s response when anger overcomes it at the sight of injustice or folly? Something within us speaks out against the spectacle confronting us. Our anger illustrates the fact that we are up against something in the outer world. The “I“ then makes its presence felt and seeks to safeguard itself against this outer event. The whole content of the “I“ is involved.

If the sight of injustice or folly were not to kindle a noble anger in us, the events in the outer world would carry us along with them as an easy-going spectator; we would not feel the sting of the “I“ and we would have no concern for its development.

Anger enriches the “I“ and summons it to confront the outer world, yet at the same time it induces selflessness. For if anger is such that it can be called noble and does not lapse into blind rage, its effect is to damp down “I“-feeling and to produce something like powerlessness in the soul. If the soul is suffused with anger, its own activity becomes increasingly suppressed.

This experience of anger is wonderfully well brought out in the vernacular use of sich giften, to poison oneself, as a phrase meaning “to get angry”. This is an example of how popular imagination arrives at a truth which may often elude the learned.

Anger which eats into the soul is a poison; it damps down the “I“‘s self-awareness and so promotes selflessness.

Thus we see how anger serves to teach both independence and selflessness; that is its dual mission as an educator of humanity, before the “I“ is ripe to undertake its own education.

If we were not enabled by anger to take an independent stand, in cases where the outer world offends our inner feeling, we would not be selfless, but dependent and “I“-less in the worst sense.

For the spiritual scientist, anger is also the harbinger of something quite different.

Life shows us that a person who is unable to flare up with anger at injustice or folly will never develop true kindness and love.

Equally, a person who educates himself through noble anger will have a heart abounding in love, and through love he will do good. Love and kindness are the obverse of noble anger.

Anger that is overcome and purified will be transformed into the love that is its counterpart. A loving hand is seldom one that has never been clenched in response to injustice or folly. Anger and love are complementary.

A superficial Theosophy might say: Yes, a man must overcome his passions; he must cleanse and purify them.

But overcoming something does not mean shirking or shunning it. It is a strange sort of sacrifice that is made by someone who proposes to cast off his passionate self by evading it. We cannot sacrifice something unless we have first possessed it.

Anger can be overcome only by someone who has experienced it first within himself. Instead of trying to evade such emotions, we must transmute them in ourselves.

Transmuted anger is love in action. That is what we learn from reality. Anger in moderation has the mission of leading human beings to love; we can call it the teacher of love.

And not in vain do we call the undefined power that flows from the wisdom of the world and shows itself in the righting of wrongs the “wrath of God”, in contrast to God’s love.

But we know that these two things belong together; without the other, neither can exist. In life they require and determine each other.

This diagram is not needed to understand the text, but is here for those who like visual descriptions. 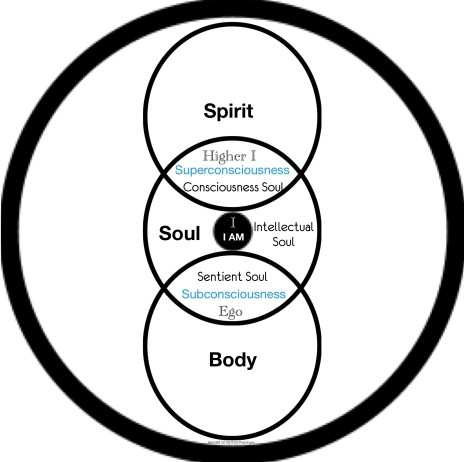 English: The Mission of Anger