The Rosicrucian Cross is the symbol for the Spiritual Stream started by Christian Rosenkreuz known under the name Rosicrucianism.

The Rosicrucian Cross combines the seven Red Roses, Lotus Flowers or Chakra’s with the Cross we have seen in the Caduceus Staff or the Tree of Life of the Kabbalah. When the Roses Bloom on the cross, the Chakras has been opened. The twelve rays are the influence of the Zodiac as the roses symbolize the planets.

With the Black Cross.

A meditation on the cross by Rudolf Steiner:

Imagine you see before you a black cross. Let this black cross be for you a symbol for the baser elements that have been cast out of man’s impulses and passions; and at the point where the beams of the cross meet, picture to yourself seven resplendent bright red roses arranged in a circle. Let these roses symbolize for you a blood that is the expression of passions and impulses that have undergone purification.

And further on the cross:

The seven Roses can be combined with the five pointed star of Venus (Lucifer) as used by the Rosicrucian Fellowship:

There exist a third cross with only one Rose:

In Max Heindel‘s description of the Temple Legend, where Hiram Abiff builds the Temple of Salomon, he writes the following about the Origin of the Cross:

Hiram was again conducted to the surface of the earth and as he walked from the scene of his shattered ambition, the conspirators set upon and fatally wounded him; but before he expired, he hid the hammer and disc upon which he had inscribed the Word. This was never found until ages later when Hiram, “the widow’s Son,” was reborn as Lazarus and became the friend and pupil of the Lion of Judah, who raised him from death through initiation. When the hammer was found it had the shape of a CROSS, and the disc had become a ROSE. Therefore Hiram took his place among the immortals under the new and symbolical name

He founded the Order of Temple-Builders which bears his name; in that Order aspiring souls are still instructed how to fuse the base metals and make the White Stone.

One of the entrances to the temple was decorated with Roses. The Rose connects to Shekinah (Sophia) who has been titled ‘The Rose of the World’, Rosamundi.

The hammer Hiram Abiff received from Tubal-Cain is The Tau Cross:

The Cross is still used in Masonic Symbolism.

Arthur Edward Waite on the Rosicrucian Cross in Brotherhood of the Rosy Cross:

Thus the Rose is a symbol of Mary because of her motherhood, but in relation to her it belongs to divine things, even as she herself stands on the threshold of Deity, being Spouse of the Divine Spirit and bearer of the Divine word made flesh. So also is the Rose of Shekinah, a Divine Rose, as she whom it typifies is Divine Mother of souls.’

The Rose of Sophia is actually the Holy Grail and Jesus Christ the Hostie.

The rose is a yonic symbol associated with generation, fecundity, and purity. The fact that flowers blossom by unfolding has caused them to be chosen as symbolic of spiritual unfoldment. The red color of the rose refers to the blood of Christ, and the golden heart concealed within the midst of the flower corresponds to the spiritual gold concealed within the human nature. 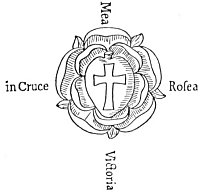 The number of its petals being ten is also a subtle reminder of the perfect Pythagorean number. The rose symbolizes the heart, and the heart has always been accepted by Christians as emblematic of the virtues of love and compassion, as well as of the nature of Christ – the personification of these virtues. The rose as a religious emblem is of great antiquity. It was accepted by the Greeks as the symbol of the sunrise, or of the coming of dawn.

First row are Kether, second row are Chokmah and Binah, third row are Chesed, Geburah, and Tiphareth,  and fourth row are Netzach, Hod, Yesod, and Malkuth.

The Tree of Life in Rosicrucian Context

Many see Kabbalah as an intellectual game without any relation to the real world, nothing could be more wrong! It’s a description of man, and what is involved in his development. Each Sephira is, of course, a spiritual principle, but for all spiritual principles there are also living beings, and further more, each being is also part of a larger being.

The Tree of Life seen from a Rosicrucian viewpoint: The seven Roses represents the seven lower Sephirots (or Chakras), where the three upper Sephirots are above man, on the other side of the Abyss.

The three Sephirots of the second Triangle, below the Abyss, are Called “The World Father” or Atma, “The World Mother” or Buddhi, and “The World Son” or Manas by the Rosicrucian’s, which are the higher layers of Man. This can also be seen in this table.

The Tree of Life can also be written with the European Esoteric names for the Sephira:

The Ten Sephira corresponds to the Spirit of Love, Harmony, Will, Wisdom, Motion, Form, Personality or Time, Fire, Twilight, and Man. 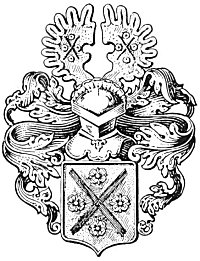